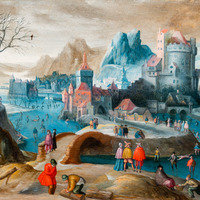 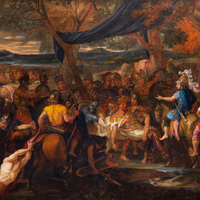 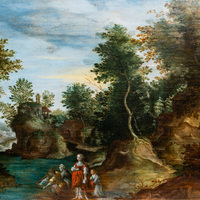 Our painting is a workshop repetition of an episode from Charles Le Brun’s celebrated history series, Les Triomphes d'Alexandre, commissioned for Louis XIV of France, both as monumental canvases to decorate his palaces, and as designs for tapestries from the Gobelins manufactory. The prime version of the present work, although completed with significant participation from the workshop, along with the other four pictures from the series were described by Le Brun as his ‘most memorable accomplishment’. That canvas (470 x 12,640 cm) is conserved in the Louvre, Paris (inv. no. 2897) and dated 1673.

The carefully articulated figure groupings according to the classical canon betray Le Brun’s long association with Nicolas Poussin (1594–1665) but also show the master beginning to define his own style. The slain elephants lying in the mid-ground to the left of the large composition and the statue idol of Heracles (from whom Alexander claimed descent) define the epic narrative in which the wounded Punjabi King Poros is presented as a captive before Alexander the Great in the aftermath of the slaughter on the Hydáspes or Jelum river in May 326 B.C. Engraved by Gérard Audran (1640–1703) the composition was immediately popular, presumably driving demand from the workshop for further more conveniently proportioned, and quickly executed versions such as the present work. As Peintre Premiere du Roi, Le Brun served both as supreme artistic director, but also chief visual propagandist of the French Court. Alexander’s charity to his fallen enemy, and Poros’s own pride and bearing, even when injured and helpless, were seen as kingly virtues which Le Brun artfully insinuates as being also emulated by Louis XIV.

- The painting without doubt in good and hangable condition.

- Small touch-ups all over, esp. in the lower part and the left top part.

- Uv-light shows foremost the typical colour of the varnish, with touch-ups all-over.